Blockchain technology has quite a lot of potentials. Just like other business ideas, it can help to solve a lot of problems. SureRemit is one startup that has found a way to harness the technology for good. The company is using blockchain technology to reduce the cost of remitting back to Africa. It just received $7 million in Initial Coin Offering (ICO) to advance its service.

Importantly though, global remittance is big business. According to World Bank data, about 250 million global migrants transferred $601 billion to their home countries in 2016. More than a third of that sum went to developing countries. $39 billion of that sum came to Sub-Saharan Africa, with Nigeria receiving $20 billion.

However, there is just one problem here; the “middle-man” involved in these transactions. The high fees charged by services like Western Union and Moneygram are significantly high for many African Migrants.

Compared to other places, Sub Saharan Africa currently pays most fees for such services. It pays roughly 10 percent for every $200 transferred.

SureRemit is a non-cash remittance platform. The startup is quite an innovator. It uses a digital voucher platform and a network of merchants across Africa and emerging markets to facilitate fund transfer. The platform leverages blockchain technology to help Nigerians, and other Africans, abroad remit money back home.

How Does It Work?

The SureRemit platform uses crypto-currency tokens to generate digital vouchers that can be used to transfer money. It, thus, offers an affordable, non-cash alternative for sending money to family and friends at home. 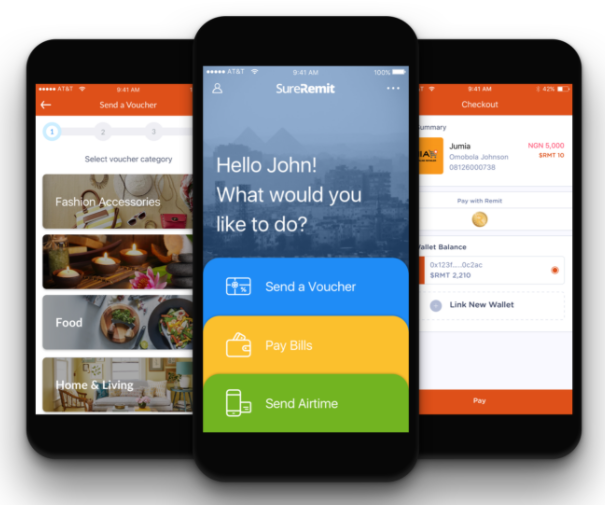 And unlike services such as Moneygram and Western Union, SureRemit has very low transaction costs. Its transaction fee is 0%.

In a statement attributed to the company, “SureRemit ensures that sending a few hundred dollars to the family is no longer subjected to fees of 7.45 percent (the global average). Using Blockchain, SureRemit can bypass the traditional banking system and connect customers directly to local merchants, who pay a small commission fee on each transaction.”

The company’s crypto product (its tokens) is connected to a pool of pre-approved merchants in African countries like Nigeria, Rwanda, and Kenya. It has plans to expand to India and the Middle East by the second quarter of 2018.

Though its tokens cannot be redeemed for cash, it can be used to confirm payment for things such as utility bills, student tuition and online consumer goods. One important approved merchant is Jumia, a popular online African merchant.

Anxious for the release of @SureRemit , they are changing how money is sent to family and friends! #SureRemit

The company gets its revenue from merchants and other businesses. It collects a small percentage from each token transaction of these companies.

SureRemit is already getting a lot of support for its growth. The startup offered pre-sales of its tokens in December ahead of its January ICO and the Fintech has just raised $7 million in Initial Coin Offering to fund its service.

Yet, its most important support comes from Hashed. Hashed is South Korea’s largest cryptocurrency fund. It is an active player in venture investing. It has previously backed blockchain services like Etherum, Airswap and Simple Token.

With this backing and the attendant blessings, this will bring to many families, we can safely say that SureRemit is the next real big deal.