The trend of internet shutdown in Africa is continuing as the government of Benin Republic has blocked internet access in the country as voting and counting of parliamentary elections takes place. The highly flawed election blocked opposition parties from even fielding any candidates for parliament.

At first, internet services including Facebook, Whatsapp and Twitter were blocked on Sunday morning. VPN services which could help users escape such restrictions were also made unavailable on Sunday. 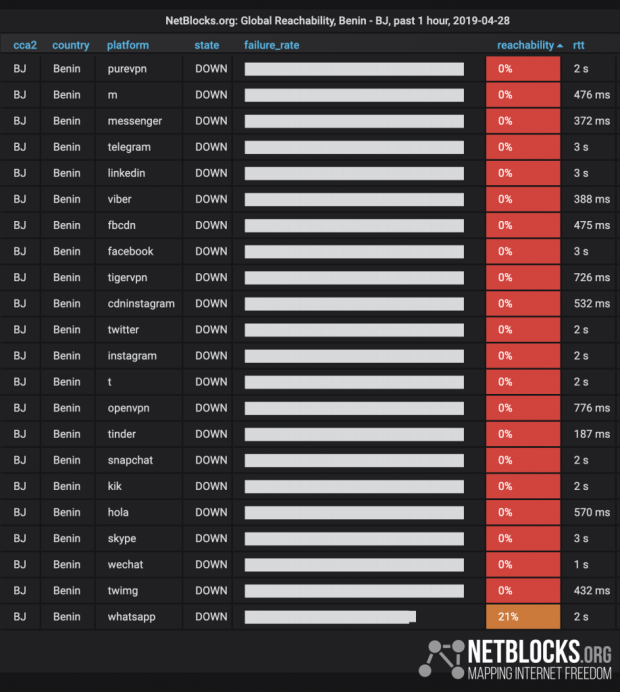 The government then followed it up by fully shutting down the country’s biggest internet provider, Spacetel.

With the internet now an integral part of the lives of billions of people, it is undoubted that blocking internet access in a country would have negative effects on the people.

The government in #Ethiopia has shutdown internet connection outside of Addis Ababa since December 2017 to hide its crime. #FreeTheInternet

But beyond the financial costs, internet shut down also affects people’s perception about internet services. To many people, the ease with which governments can block the internet means it’s always better to run businesses offline than online. This is particularly true for countries where government control of the internet is strong.

Unsurprisingly, in many of these countries government is usually dictatorial and its control over the internet is strong.

Until African leaders realise that the internet is a tool for technological and economic advancement and not a weapon for political subjugation, Africa and Africans will continue paying the steep price for their misplaced priority.