Data from the Nigeria Inter-Bank Settlement System (NIBSS) shows that POS transactions have fallen since the start of 2019.

2018 was a very vibrant year for POS transactions. According to NIBSS data, POS transactions in Nigeria topped N2.3 trillion. That’s an incredible 65% leap from the N1.4 trillion recorded in 2017.

However since the start of 2019, POS transactions have dropped month on month for the first two months of the year.

Transaction volumes have also been slipping too. 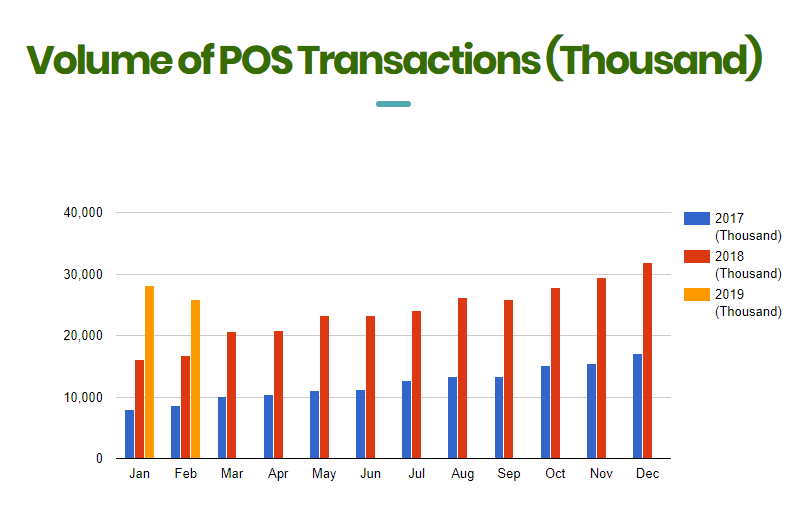 On the one hand, the decline is not uncommon or surprising. Since 2017, NIBSS data has always shown back to back declines in POS transactions for January and February.

Also, December is a peak period for retail spending, so it’s not unusual for declines to happen in the next month. In fact, for 2017 and 2018, POS transactions drop in the months of January and February, but grew again in the month of March.

But this time around, industry players may need to be concerned about the latest drop. And the reason is simple: high rates of failure for POS transactions.

According to real time data from the NIBSS, 340,653 POS transactions had been made by 12:37 PM today. However the failure rate stood at an incredible 28.34%. In other words, over 96,000 POS transactions have failed at that point of the day.

However NIBSS insiders say the issue is multifaceted.

One the one hand, sources say the issue is caused by a host of problems both from the clients and the providers. This is not surprising though. In 2018, NIBSS attributed 19.9 million failed transactions to “insufficient funds” on the client side.

But insiders still believe the issue in March has grown out of hand since the NIBSS platform crashed on December 24, 2018, a peak period. On that day, failed transactions reached 25%, which is still less than today’s failure.

Meanwhile the NIBSS has blamed the problem on an “industry system glitch”, a pragmatic way of not apportioning blames.

“When issues like these come up, the tendency to apportion blames and not be responsible is there. The truth is that there are issues, but they industry glitch. Everyone is needed to resolve it,” she told the Guardian.

@DaimondBankNg @DiamondBankHelp, I was debited for a failed pos transaction, called your customer service and yet to get a reversal. I also made a transfer to my @AccessBankNg @accessbank_help and yet to get the money. Pls this is getting more frustrating #CBNNIGERIA

@FBN_help @FirstBankngr plz help refund my money. Made a POS transaction which failed but my account was debited,i lodged a complain via ur customer care service after 24hrs of non reversal thereby was told 2 wait 7working days & itz already over 10days my money is yet 2 reflect

@DiamondBankHelp @DiamondBankNG today is the 15th day of not resolving a failed POS transaction reported to you. DB-190319926160. It's really unfortunate that you abandoned this case except you are prompted. I'm so discouraged at the failure rate of your online platforms.

Nevertheless, if the situation continues unchecked, it is the customers who will lose. Failed POS transactions sometimes lead to accounts being debited. Reversals do occur automatically many times. But other times, users have to make the complaints themselves, some times very aggressively, before it is done.

With failed transactions ballooning in March 2019, banks should expect a lot of customer complaints.