About five to 10 years ago, the growth of internet companies like Facebook and Google became a huge threat to the telecom industry. With the introduction of instant mobile messaging, voice calls and later video chats, services like Facebook, Whatsapp and Google began killing important revenue streams for telecom companies.

Over the last 3 years, tech companies have increasingly delved into TV content production.

Exciting times. The only bastion left (that has not fallen) is live sports. The day Amazon/Netflix/FB figure out how to stream NBA/LaLiga/EPL/Bundesliga/SerieA and Cricket (in some countries) at scale – cord cutting will be complete and decisive. But live broadcasting is tricky

Traditionally, Netflix has been the leading tech company radically changing the role Silicon Valley plays in the broadcasting world. However today, other companies, like Amazon, Facebook and Google have increasingly made strong pushes into the broadcasting space.

Thanks to the power of streaming, these companies are using their tremendous finances and digital architecture to unseat traditional players in the TV and broadcasting industry. With billions of people on the internet consuming a large chunk of video contents, it’s only logical for these companies to look for ways to cash in.

For instance, Facebook and YouTube have developed dedicated segments to provide a deep library of contents for users.

Globally, these companies are implementing two strategies that are helping them gain the upper hand in the broadcasting world and attract more users.

Facebook and Google are on a relentless push to provide free internet to billions in Africa and in Asia. Officially, their mantra for doing this is to make the internet accessible and provide useful information to people.

However, the truth is, greater internet access is a slippery slope for greater reach and therefore greater revenue potentials them.

So providing free internet access which largely looks like an end in itself, is actually a means to an end for these companies. And in with their plans to lead the broadcasting business, this is a crucial goal.

Online streaming is still too expensive and more so compared to regular TV viewing. Free internet is the first step to provide a similar viewing experience as TV.

In Nigeria, the TV broadcast market is a relative monopoly controlled by MultiChoice. But it wasn’t always like this.

Some 10 years ago, MultiChoice’s DStv had an impressive competitor in HiTV. However the HiTV lacked contents, and its only really value was in premium sports content. But when it lost the license, it collapsed immediately.

Over the last few years, companies like Facebook, Netflix and Amazon have not only deepened their pool of original contents, but are also buying up licenses to established sports content.

Two days ago @facebook signed a deal to broadcast @LaLigaEN in India and said it was not looking to buy large number of sports content worldwide.
Today they signed a deal with @UEFA to broadcast the Champions League in Latin America. pic.twitter.com/wKUGnGJ1aV

Amazon has bought some TV viewing rights for English Premier League matches. The company got a deal to show 20 matches per season for three years, beginning with the 2019/2020 season. Meanwhile Facebook has bought rights to the UEFA Champions League, as well La Liga rights in India. 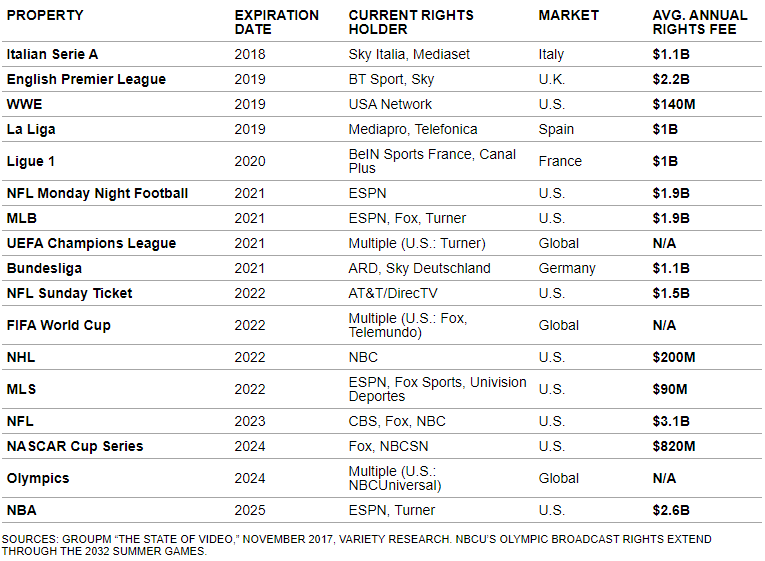 Furthermore, between 2019 and 2020, license agreements for big events like La Liga, Ligue 1, EPL, and even WWE are expected to expire. Big tech companies are preparing their war chests to compete in the bidding wars.

With near limitless resources, big tech companies have an advantage over regular broadcasters like Telemundo or BT Sport. And if they continue buying up more franchise sporting licenses, nothing will stop them from pushing other broadcasters into oblivion.