The second installment of the hugely successful TEDxYaba conference is scheduled to hold on December 8, 2018 at Nikoms Event Centre, Edmund Crescent, Yaba.

This year’s conference, themed “Reboot” packs a repertoire of speakers who have attained notoriety and success in their various fields. They will be delivering talks geared towards igniting the kind of thinking and ingenuity required for solving problems and breaking new grounds. Some of the confirmed speakers include Segun ‘Sega’ Awosanya, Christian Nwamba, Adeola Ade-Ojo, and Adewale Ajadi. 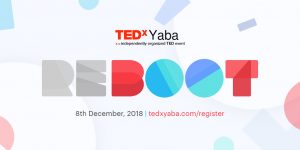 Speaking on the theme of the conference, Emmanuel Adegboye, convener of TEDxYaba says “If you’re passionate about positive change in Nigeria, it’s very easy to get tired and frustrated when you realise how seemingly insignificant your impact is in the grand scheme of things needed to fix the country permanently. By ‘fix’, I mean moving the needle in a positive direction and setting us on a consistent path of undeniable progress, judging by globally accepted indices and metrics. This has been my mood for the past couple of months but it’s time for a Reboot, and I’m very excited about the conversations this conference is going to ignite, and the changes that will follow.”

This year’s TEDxYaba conference also offers, for the first time, a TEDxYaba Women event tagged “Showing Up” on December 9th, after the international TEDWomen 2018 conference of the same theme holding from November 28 – 30. This year’s TEDxYaba event promises a convening of women who are breaking out of the status quo, rising up and pushing boundaries to foster meaningful change.

Another first with this year’s event is the Innovation Lounge program – a platform affording the most innovative for profit/non-profit early stage enterprises in Lagos solving critical local problems the opportunity to get selected to be among the 10 ventures selected to do an exhibition at the TEDxYaba event and connect with partners on December 8. Innovation Lounge is the product of a partnership between TEDxYaba and Passion Incubator. To sign up and get a chance to pitch your venture CLICK HERE.

TEDx Yaba 2018 is sponsored by the Lagos State Employment Trust Fund and Peak Milk. A call for volunteers is currently ongoing for the event. CLICK HERE to either register to attend or/and sign up as a volunteer. Attendance is free but strictly by invitation, hence the need to register early enough.

In the spirit of “ideas worth spreading,” TED has created TEDx. TEDx is a program of local, self-organized events that bring people together to share a TED-like experience.

Our event is called TEDxYaba, where x refers to independently organized TED event. At TEDxYaba, TEDTalks video and live speakers will combine to spark deep discussion and connection in a small group. The TED Conference provides general guidance for the TEDx program, but individual TEDx events, including ours, are self-organized.

TED is a nonprofit organization devoted to Ideas Worth Spreading. Started as a four-day conference in California 25 years ago, TED has grown to support those world-changing ideas with multiple initiatives.

The annual TED Conference takes place in Long Beach, California, with simulcast in Palm Springs; TEDGlobal is held each year in Oxford, UK. TED’s media initiatives include TED.com, where new TEDTalks are posted daily, and the Open Translation Project, which provides subtitles and interactive transcripts as well as the ability for any TEDTalk to be translated by volunteers worldwide.

TED has established the annual TED Prize, where exceptional individuals with a wish to change the world are given the opportunity to put their wishes into action; TEDx, which offers individuals or groups a way to host local, self-organized events around the world; and the TEDFellows program, helping world-changing innovators from around the globe to become part of the TED community and, with its help, amplify the impact of their remarkable projects and activities.

Follow TedxYaba on Social media using the links below.