Paylater.ng, the popular loan rendering startup, has just announced PayVest, a new feature as part of its services. With a two-year experience in providing loans and other services, the company realized that “sometimes, you also need to plan well into the future and better control your financial flows by putting away money.”

PayVest is a bold solution to this issue. The feature is a fixed-interest investment account for Paylater.ng users. With PayVest, users can save, or rather invest, some portion of their earnings and expect high returns later.

Although several investment options already exist in Nigeria, most do not offer reasonable returns. Beyond brick-and-mortar businesses, most investments either have high entry requirements or offer paltry returns. For instance, since 2017, investments in treasury bills have been restricted to investors with funds above N50m while savings deposited at banks have historically never offered reasonable returns.

PayVest appears to be an attractive investment option. The feature promises an annual interest rate of 15.5%. This is a huge figure, relative to that offered by banks and means that you can earn above the inflation rate.

Mutual fund is currently giving me about 12%, but @paylaterNG is saying I deserve more. Are you thinking what I am thing? 🤑🤑🤑 pic.twitter.com/p5tUTXhXDi

PayVest allows users to set up as many as five short and long-term investment plans. It also allows investments ranging from N50 thousand to N10 million.

Interestingly too, the feature offers no hidden charges. There are no fees to set up an investment account or to maintain one.

While it started out as a loan service, Paylater.ng has added quite a number of new features recently. The app now supports airtime recharging, funds transfer, and utility bills payment. 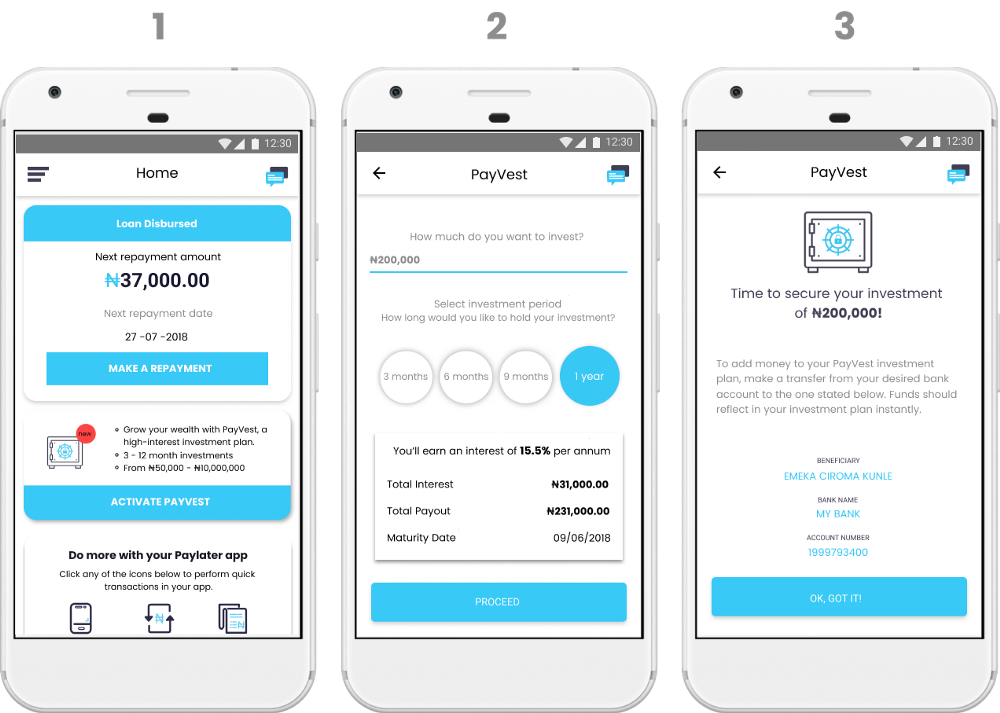 With PayVest, Paylater.ng ultimately transforms from a simple loan service app to a full-blown financial services app. Now, this transition is not entirely surprising and as it must have been quite easy for the service.

The new feature is available from within the Paylater.ng app. Simply click on “Activate Payvest” from the homepage and you can begin investing right away.