For no definite reason, the “jobs market” is suddenly becoming competitive for big tech companies. Google just announced some impressive features for job seekers and businesses on the African continent. The new features would make it easier for African to find job opportunities and monitor jobs openings.

Relying on the strength of Google Search Engine, the new features would allow people to find job openings when they type “job-seeking queries”. These include queries like “jobs near me”, “teaching jobs”, and “accounting jobs”. Google announced that the jobs feature is available for people in Nigeria, Kenya, and South Africa.

Unlike the features Facebook released yesterday,  Google’s jobs feature is more powerful than one could ever imagine. It displays a slew of information about job offerings. Job seekers get to see the description, reviews and ratings of their prospective employer. This makes it harder for fake job postings to emerge, and that is a huge relief for job seekers who have to double-check  job offerings to determine if they are legitimate and not scams.

To do this efficiently, Google is partnering with job companies such as Fuzu, Jobberman, NGCareers, and Careers24. With this partnership, Google is would aggregate latest job postings on their websites for the benefit of job seekers. 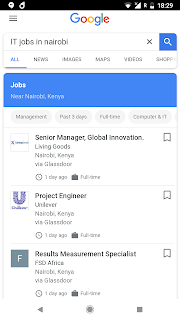 Job searches can also be filtered by criteria such as location, date or job title. This would guarantee that both employers and job seekers get precisely what they want.

Added to these, when a user is logged in, the feature could calculate how long it would take a user to get to work from their home. These are pretty interesting features. 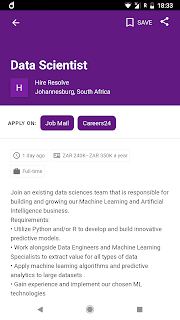 However,  if job hunting becomes too tiring, users can save job searches and continue another time. Google keeps this information safe and uses it to update you with job opportunities when you return.

Alerts and email notifications can also be turned on to keep track of the latest job postings.

The company also made a few features available for businesses to take advantage of. One of which includes direct job postings, and a few other tools to make job postings more discoverable.

Google Looks to take on LinkedIn?

Goolge announced that the new features are part of its desire to improve economic opportunities for African job seekers and employers.

With this feature being released a day after Facebook opened its own jobs feature to over 40 countries, could we be seeing a new competition in the job search market? Could both companies be trying to break Microsoft’s LinkedIn hegemony in the job market?

Neither Google nor Facebook have admitted to this publicly. However, considering that both platforms are leveraging their core technologies (Facebook’s knowledge of people and Google’s knowledge of the Internet), we believe that a new competition is on the rise. But of course nothing is certain, at least not yet.