Dear Entrepreneur, Here are 3 Ways Multitasking can Ruin your Business and Career

Multitasking is a first a computer term which describes the concurrent execution of multiple tasks or processes over a certain period of time found its way into publications and general use in the 60s. In the workplace or in general terms, multitasking is referred to as the ability to perform more than one task or activity simultaneously within the same timeline.

A few examples will be taking a phone call while filling or signing a form, texting while having a verbal conversation, snacking while replying a mail or even eating while watching TV. However practicable or intriguing this sounds, research has shown that multitasking does more harm than good as it leads to errors as a result of insufficient attention.

This will become clear in the few points below:

Multitasking Can Make You Lose Focus

The growing concern about the effects of multitasking has led to several research works. A study has shown that younger people, especially in this generation, are more likely to exhibit behavioural distractibility as a result of technologies around them that promote multitasking.

Hence, by responding to so many distractions like texting while watching a movie or playing a video game while receiving a phone call, makes one lose the ability to distinguish between what is important and unimportant or what is urgent and not urgent.

If you live in Lagos or in most civilized cities, you will know it is a serious offense to be texting or making a phone call while driving. This danger should not only be looked out for by drivers but pedestrians as well.

In an article published in 2016, it was highlighted that in Great Britain, official figures show 446 pedestrian deaths in 2014 due to ‘lack of attention’. This represents a 12 percent rise from 2013 when 398 pedestrians were killed and 72 percent of drivers often see pedestrians step into the road when distracted as they ‘zombie walked’ because of ‘multitasking’—text-walking or listening to media with ears blocked by earphones.

Most jobs specify as a requirement the ability to multitask as a qualifying criterion for recruitment with the seeming hope to drive efficiency and productivity.

On the contrary, although not alarming, research has shown the exact opposite of what most multitaskers believe—multitasking actually made participants less efficient and productive. According to Forbes, “Multitasking reduces your efficiency and performance because your brain can only focus on one thing at a time. When you try to do two things at once, your brain lacks the capacity to perform both tasks successfully”. 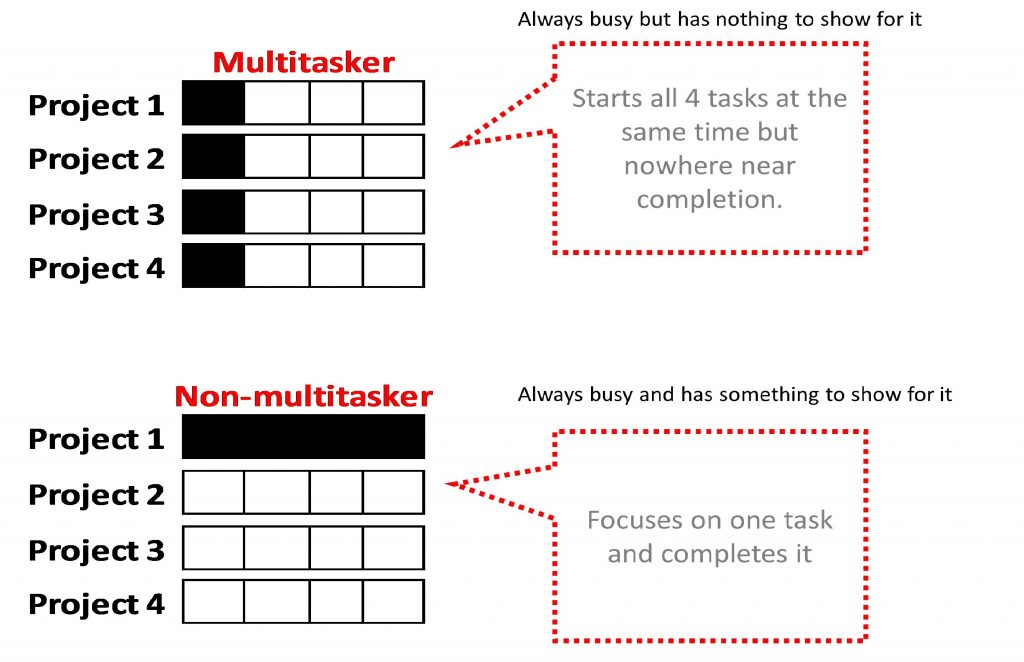 The human ability to do more than one thing at a time referred to as multitasking has proven to be more of a danger than a harbour. As opposed to the general perception that it saves time and demonstrates efficiency, it can be the greatest time waster and can greatly slow down your productivity.