Report: Here is a Roundup of the NCC Telecomms Consumer Complaints for Q3 2017

The Nigerian Communications Commission has released its consumer complaints report for the third quarter of the year (Q3) in compliance with the Consumer Complaints Management policy developed by the Consumer Affairs Bureau (CAB) of the Commission.

Toll free means you will not be charged for a call. Are you being charged for toll free calls? Please contact your service provider. #YearofTelecomConsumer pic.twitter.com/YXObAfZjGL

The report was generated from the complaints from telecom consumers using the Toll-free line-622,
Consumer Web Portal, various Social Media handles as well as written complaints from customers. The NCC received a total of 18,711 complaints in total. That amounts to an increase of 3,334 (21.7%) from the total number of complaints received the quarter before (15,377). 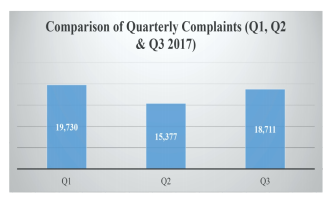 The fact that the figures are patterned according to the market dominance proportion of each of the service providers indicates that the complaint rate does not necessarily indicate network acceptability nor the quality of service delivery of the providers. 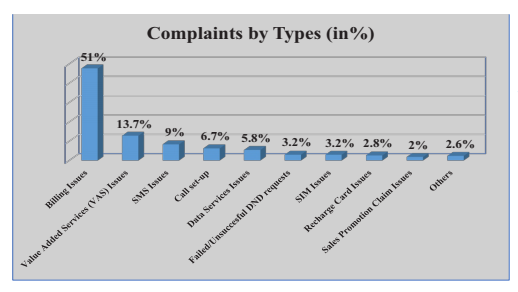 According to the NCC, complaints about billings include report relating to deductions from activations of unsolicited VAS and telecom promotions and products, over deduction (Inaccurate charges), charges for unauthorized services, charges for unsuccessful calls, charges for undelivered SMS, inability to change, tariff plans, virtual top-up deducted but not received and charges for Caller Ring Back Tune not downloaded.

Perhaps, you may be wondering if there is the possibility that network providers may be deliberately jamming the helpline. NCC assures that it monitors the ease with which Consumers are able to connect to Operators helplines for lodging of complaints, enquiries etc.on a regular basis. According to the release by Mr Tony Ojobo, the Quality of Service (QoS) Regulations target for connection to the is ≥ 98%.

As you can see, there are not really doing badly. And, on this one, we say Kudos to the NCC!