ntel has announced Bose Alao Omotoyossi aka Boss Lady QueenBee, as its Brand Advocate. The actress was unveiled last week in Lagos. According to the telecoms service provider, the deal is for a one year period in the first instance.

As part of her bargain, Bose Alao is required to push the ntel brand through her social media channels and social interactions. She will participate in company events and act as brand advocate espousing the unique attributes, capabilities and potentials of the brand as well as its products. 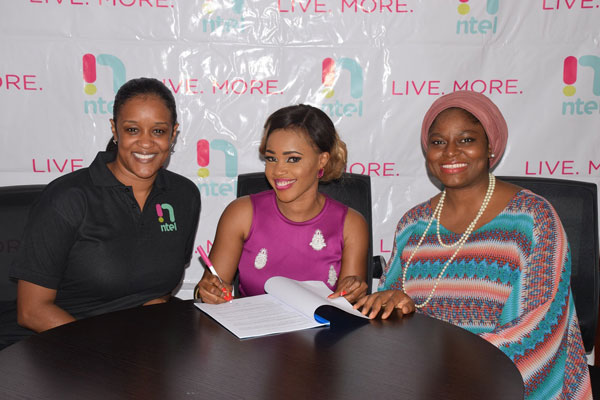 Bose is a mother of four and is married to an international footballer, Razak Omotoyossi. She was voted Best Actress at the 2011 ZAFAA Awards, United Kingdom. She hit national limelight after her role in a popular play, “Itakun “.

Commenting on the choice of Bose Alao Omotoyossi as Brand Advocate, Abhulime Ehiagwina, Ag. CEO of ntel said “Bose brings a uniqueness to ntel as Brand Advocate on account of her crossover appeal, youthfulness as well as her vivacious and vibrant personality. We consider her a good fit for brand ntel and look forward to a mutually beneficial relationship.”

This deal is one more in the steady stream of celebrity endorsement deals by Telecomms firms in the country. Leading the pack are the big players in the industry. MTN, for instance, boasts of a list of renown celebrities who have represented their brands and some still on their payrolls.

Marketing masterstroke from @MTNNG!
From nowhere" before our very own eyes "Saka port go MTN"! Follow us @gogagatv for more #advertainment pic.twitter.com/4GvfsilIqA

Recall that at one point, MTN scored a major publicity point with the signing of Saka (a popular comedian renowned for representing the then Etisalat brand) to launch their advert on “network porting”. Always, these celebrities are signed to help project the brand identity of their sponsors to the huge following. The only concern we may express is the conspicuous neglect of talents in the academic or innovation space. These people need more than opportunities as motivational speakers. Don’t they?