“Demonic Facebook App”: the Result When the Men of God and the Apps of Men Clash

It was in the news a few days back that a Man of God has said that it was wrong for anyone to allow an app predict his character and he condemned those promoting social media apps that ‘predicts’ peoples future. According to Nigeria Communications Week, Brother Gbile Akanni, a leader and teacher of Peace House in Gboko, Benue State, said that it amounted to divination.

Just that you know, he refers to a viral Facebook application, https://en.testony.com/.  Testony ‘predicts’ futuristic events like dates of marriages, dates of deaths, how you will die, if you will go to heaven or hell, if you will be rich, future profession and many other unknown events. 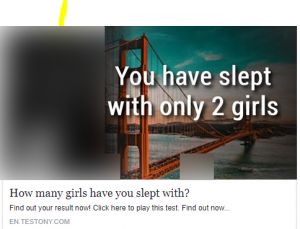 And, it is gradually gaining popularity online, especially among Nigerian internet users. According to Alexa, Testony has a global ranking of 3,132, 1,470 in the US. Alexa also showed that here in Nigeria, Testony has a ranking of 109, and that Nigerians are its fifth largest number of users, with 6.4% of the total users, while the US is first, providing 17.9%, with most users using the app through Facebook.

It is important to note that Brother Gbile is not averse to the use of social media as his discovery was made known on his Facebook page in a post which he titled “SOCIAL MEDIA DIVINATION”. In his post, Akanni claimed that this was shown in a revelation he received from God. According to him, “I was shown that many internet users were guilty of the demonic practices of divination and medium consultation through the use of some applications which ‘predict’ the future.”

This revelation by Brother Gbile Akanni is predicated on the notion that the psychological effect of the usage of such apps on the users is profound, as the need for ‘prophecies’ and ‘predictions’ have been always a weak point for many humans. The truth, however, is that most users of the app do not take the predictions seriously. Sometimes the details of the predictions are usually outdated, unrelated or outrightly false. Hence, they cannot come to pass anyway.

Perhaps one may be forced to ask, how are the prophesies generated by these apps different from those church goers get from some of their prophets. In some instances, they are as well outdated, unrelated or outrightly false. The only difference is the source.

While religion has taught us not to doubt the voices of the men of God, this injunction has been beleaguered by a number of preachers and teachers who have labelled innovations as evil or even made false predictions in the past. So, it will be necessary to ask at this point what Brother Gbile intends to attain with this announcement. Is this message truly from God or a reaction of a man of God?

What we know is such third party Facebook apps may be used as funnels for hacking a social media profile of a user.  It is advised that you stay away from them, especially when it requires permissions to access personal details.